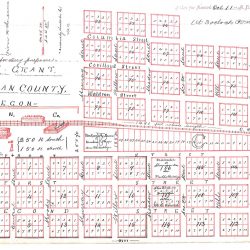 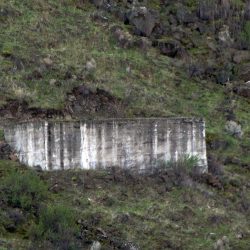 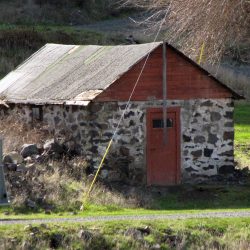 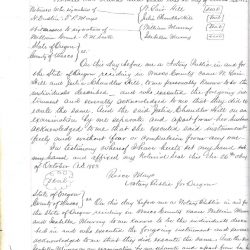 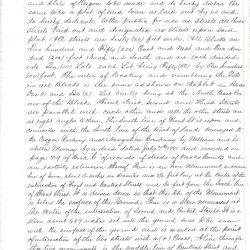 The first town in Sherman County evolved from the rail siding about seven miles E of Celilo in 1881 to a rail and river wool and wheat shipping center in the NW quarter of section 2, T1N, R16E. It was platted as Grant and called Grant’s Landing, Grant’s Station or Grant’s.

During Oregon Railway and Navigation Company construction in the 1880s, the site was called Villard for Henry Villard, president of the company. In 1875 he helped reorganize the Oregon and California Railroad and the Oregon Steamship Company and the following year became president of both companies. In 1881 he secured direct control of the Northern Pacific Railroad and became its president. The railroad’s transcontinental line was completed in 1883 under his management.

Named for the Scottish-born merchant Grant brothers, William and Robert, it was sometimes called Grant’s, Grants, Grant’s Landing and Grant’s Station. The ferry landing was on the Columbia River at the N side of town.

1894 Flood. A distillery and flourmill were built about 1894. In 1894 the Columbia River flood washed away much of the town, leaving little to salvage. The Maryhill-Grant ferry landing was on the bank of the Columbia River at the N edge of this town site. According to William G. McDonald, as the snow began to melt in the mountains in the spring of 1894, the Snake River and Columbia River rose in the middle of May, rising three inches, dropping two inches, but always gaining until the water rose at Grant past the normal high water stage until there was a sea from cliff to cliff.  First people moved their goods from their cellars, then to upper floors. Mr. Hoggard put a marker in the water in order to measure the rising water.

What could be moved from the town’s school, the Caledonian and Cosmopolitan hotels, a rooming house, depot, distillery, butcher shop, two saloons and two stores with an estimated stock of $175,000, was loaded on flatboats and rafts pulled behind rowboats. The ferryboat Nellie was used to assist in taking men and goods to safety. The greater part of the town washed out, including a section of railroad, leaving only the depot, elevator and a few residences.

Grant was never completely rebuilt. In 1898 Polk’s Gazetteer noted that the town had a post office, four hotels, a school, railroad agent, stage service to Goldendale, blacksmith, livery, fruit growers, teacher, justice of the peace, farm implement and harness and saddle dealer, notary and general store and a population of 75. In 1987 Jack White stated that the remnants of Grant included two original cisterns and a rock building.

“We, William Murray and Isabella Murray his wife and W. Lair Hill and Julia Chandler Hill his wife all of the County of Wasco and State of Oregon have caused the foregoing and above plat of the town of Grant in the County of Wasco and State of Oregon to be made and do hereby declare the same to be a plat of said town as laid out by us and do hereby dedicate to the public for use as streets all those streets laid out and designated as streets upon said plat. All streets are sixty (60) feet wide. All Blocks are Two hundred and Fifty (250) East and West and Two Hundred and Fifty (250) North and South and are each divided into Ten (10) Lots each Lot being Fifty (50) by One hundred (100) feet. The order of locating and numbering of the Lots in all Blocks is the same as shown on the plat in Blocks One (1) and Two (2). Lot One (1) being at the North East Corner of the Block, Front, First, Second and Third Streets are parallel with each other and all the other streets are at right angles to them. The South line of Front is upon and coincides with the South line of the tract of land conveyed to the Oregon Railway and Navigation Company by William and Isabella Murray by a deed dated July 4th 1881 and recorded on page 719 of Book G of records of deeds of Wasco County and an easterly extension thereof. There is an iron monument, a round bar of iron, about 1 ½ inches in diameter and 2 ½ feet long at the center of the intersection of Front and Central Streets and 30 feet from the South line of Front Street. It is driven down so that the top of the monument is below the surface of the Ground. There is a Stone monument at the center of the intersection of Second and Central Streets. It is a stone about 6 x 9 inches set into the ground so as to be even with the surface of the ground and is marked at the point of intersection of the two streets with a (+) Cross. A line through the two monuments is the middle line of Central Street and crosses the South line of said tract conveyed by William and Isabella Murray at right angles at a point 620 feet easterly from the South West corner of said Tract. This middle line of Central Street is the base line from which all lots, Blocks and Streets may be located. The two monuments were set by W. Lair Hill, William Grant and William Murray when the survey was made on the 13th day of October 1883. From stable of William Murray situate in Block 2 bears 62” 50’ West of the line from the Iron Monument to the Stone Monument and is 68 feet and 1 inch distant.

“Witness our hands and seals this 26th day of October A.D. 1883: Witnesses to the signatures of W. Lair Hill and Julia Chandler Hill: H. Dustin, T.P. Mays. Witnesses to the signatures of William Murray and Isabella Murray: William Grant, O.M. Scott. State of Oregon, County of Wasco.” Pierce Mays and Owen M. Scott affixed their notarial seals to this document on the same day.