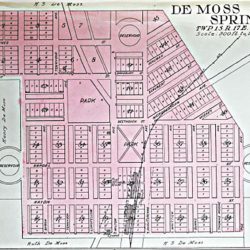 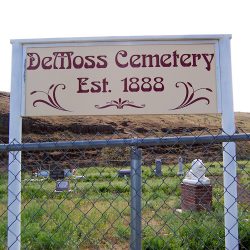 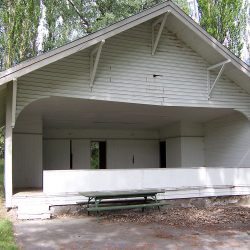 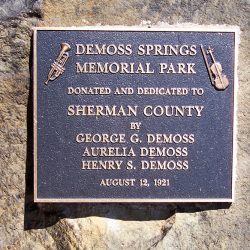 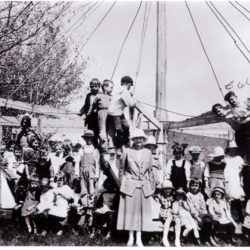 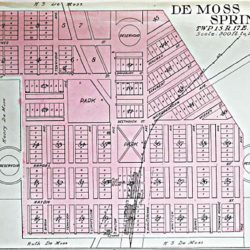 DeMoss Springs is the third name for this temperance town site and post office in section 3, T1S, R17E near where the DeMoss musical missionary family settled in 1883. Mrs. J.M. DeMoss selected the town site for the family headquarters when the land was claimed by Pierre Cutchier (aka Pierre Couture, Pierre Gordon). The temperance town plat was filed in the county clerk’s office in February, 1898. The streets were named E and W for noted musicians and N and S for poets.

James M. DeMoss and family secured 840 acres where they made their home when not on tour. Their livestock brand, shaped like a fiddle, was registered in 1940. The family set aside a park, now owned by Sherman County, and a family burying ground at Echo Rock. They entertained on the stage at the center of the park.

DeMoss Springs Park was dedicated as a park in 1897 by the DeMoss family, renamed DeMoss Springs Memorial Park in 1921when it was deeded to Sherman County. The County’s only park is a shady wayside on Highway 97 was placed on the National Register of Historic Places in 2006. Members of the DeMoss Lyric Bards toured America from 1870 to 1912 and Europe in 1895. James DeMoss moved his family to their DeMoss Springs farm headquarters in 1880. George and Henry DeMoss set aside five acres for a park in the town and planted poplar trees as a windbreak. Each tree that George planted was named for people in the area. About 1922 a 3’ x 300’ basalt retaining wall defines the W and S edges of the park along Barnum Creek with basalt and concrete pilasters at two entrance gates. The next year the family built picnic tables and a restroom, installed a septic tank and provided garbage barrels. In 1919, the family employed a local contractor, R.C. Byars, to build a 24’ x 30’ open-air bandstand with two 4’ x 12’ dressing rooms, a 4’ hallway, and a double-strength floor to accommodate use of a piano. A bridge over Barnum Creek was located NE of the bandstand. An early photograph shows a large wooden horse-power merry-go-round. A 1916 photograph shows a small wooden ferris wheel near the entrance. In 2008, the County and Oregon Department of Transportation made restroom and parking improvements. ~Weekly Reminder, The Dalles, OR 1986; Michael W. McArthur, Sherman County Judge;  Ruralite, Wasco Electric Edition, 1970; SC:FTR; Elbert DeMoss, Sweet Oregon.

If music be the food of love, play on, Give me excess of it; that surfeiting, The appetite may sicken, and so die. –  William Shakespeare, Twelfth Night