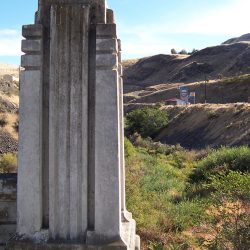 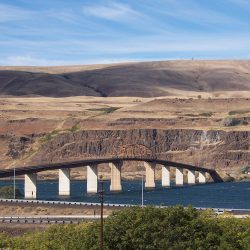 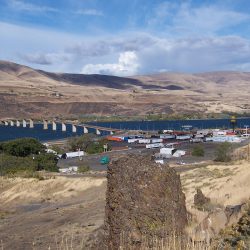 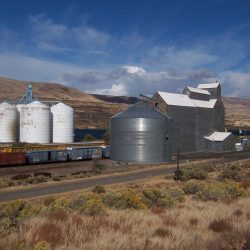 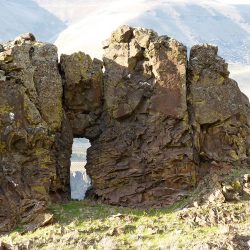 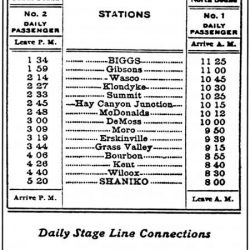 Biggs was first located on the east bank at the mouth of Spanish Hollow. It grew as a post telegraph and express town and rail station at the junction of the main Oregon Rail & Navigation Company / Union Pacific Railroad line along the Columbia River and the Columbia Southern Railway branch into Sherman County, The present day junction is formed by Highway 30, Highway 97 and Interstate-84.

William H. Biggs secured land at Wasco in 1880 and served as a state legislator about 1886 before the county was formed in 1889. He was instrumental in developing legislation that required the railroads to install sidings, including one at Biggs. He is shown in the 1900 Voters Register as W.H. Biggs, 67, farmer, section 9, T1N, R17E, Wasco Precinct.

Not a particularly inviting locale for the earliest white settlers, it piled high with drifting, blowing sand against basalt bluffs. To maintain clear rails, wooden fences were built along the railroad tracks. Sand drifted against the buildings, sometimes into second story windows of the hotel. The 1888 population of Spanish Hollow was 75.

The Observer reported a steam ferry under construction and blowing sand at Biggs in April 1901. Lucius Clark operated a small sail ferry to pull scows between Columbus (Maryhill) and Biggs. Howard Burnett, who became president of Union Pacific Railroad, grew up at Biggs when the town stretched to the west.

Biggs Jasper is found in this area. Memorable were the mechanical figures that played music for a dime at Dinty’s restaurant operated by Mattie and Pete Finley where the sign read, “Sleep, Eat and Get Gas With Us.”

A 1913 plat of Biggs, T2N, R16E, shows, N to S, the OWR&N Railroad, immediately S of which were stockyards, a grain warehouse and depot. Along the S side of the main street are buildings and residences of H.T. Shearer, Mrs. J.J. Hecker, Mrs. B. Keenan, Pat Hanlon, A.B. Wolfard, post office and store, I.D. Calbreath and the hotel.

Still unincorporated in 2017, Sherman County’s first traffic lights were installed on May 22, 2016. The Sherman County Court (board of commissioners) serves as the Biggs Service District board of directors.