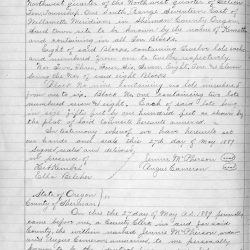 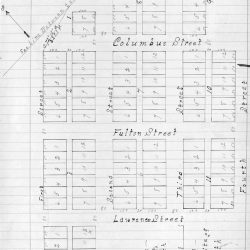 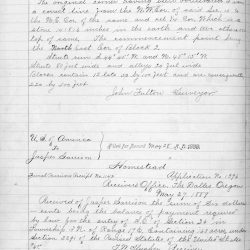 by Sherry Kaseberg
~ Sherman County: For The Record, 2014

“Sentiment for a new county came quickly, whipped up by the newly established Wasco Observer of which C.J. Bright was editor and R.B. McMillin, part owner. The activity started around Wasco did not receive spontaneous support from the Grass Valley country,” wrote Giles French in The Golden Land.

E.O. McCoy was the new representative for East Wasco County. He introduced a bill to create Fulton County with the southern boundary at the Crook County line. Opposition from the south placed the line a short mile south of Grass Valley. The new county was to honor Colonel James Fulton, but political maneuvers changed the name to Sherman. There was a new county in 1889 and the county seat was Wasco.

Wasco remained the county seat until another election was held in 1890 in which residents voted on the location of a permanent county seat, Wasco or Moro.

A third proposal was in the running, the proposed townsite of Kenneth in Grass Valley Canyon, a mile east of DeMoss.

In anticipation of the selection of a county seat, Bessie Jane “Jennie” (Waite) McPherson and Angus Cameron, a McPherson or Waite relative, proposed a townsite, naming it Kenneth for her deceased husband.

The McPhersons came to Wasco in 1882 from Solano County, California with their sons, John and Kenneth. Their daughter, Nellie, was born here and married J.M. Woods. The old baseball diamond was in front of the McPherson home at the southeast corner of Wasco – McPherson Field.

Residents between Wasco and Moro and the Hay Canyon country favored Kenneth. With three locations up for vote, none received a majority.

The 1891 legislature added another 18 miles on the south, bringing in more citizens. The election of 1892, with Kenneth out of the running, gave a choice between Wasco or Moro, and it was decided by a vote of 404 to 301.

“Townsite of Kenneth, Or. ~ Filed for Record May 27 A.D. 1889. This is to certify that Jennie McPherson, widow, and Angus Cameron, unmarried, have surveyed, platted and set apart as a town site to the public forever the following described real estate situated on the Northwest quarter of the Northwest quarter of Section Ten, Township One South, Range Seventeen East of the Willamette Meridian, in Sherman County, Oregon. Said town site to be known by the name of Kenneth and containing in all Ten Blocks.

“Eight of said Blocks containing twelve lots each and numbered from one to twelve respectively.

“No’s. Two, Three, Four, Six, Seven, Eight, Ten and Eleven being the No’s of said Blocks. Block No. Nine containing six lots numbered from one to six. Block No. One containing two lots, numbered seven and eight. Each of said lots being in size fifty feet by one hundred feet as shown by the plat of said townsite hereunto annexed.

“In testimony whereof we have hereunto set our hands and seals this 27th day of May, 1889. Signed, sealed and delivered by Jennie McPherson [and] Angus Cameron in the presence of H.A. Kembel [and] Ella Belcher.”