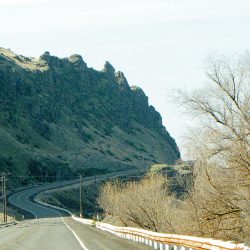 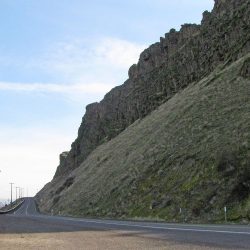 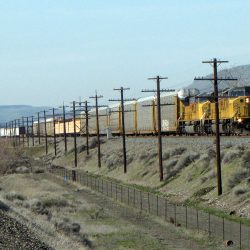 Mattie’s Hump & Mattie Finley: “Sleep, Eat and Get Gas with Us”
By Sherry Woods Kaseberg

Oregon Geographic Names Board member Mike McArthur suggested the research that led to my proposal naming Mattie’s Hump for long-time Biggs resident, Mattie (Parks) Finley. While I did not know Mattie, stories about her years as a Biggs Junction businesswoman captured my interest.

Teri Sanderson of Biggs knew Mattie and wrote, “I have always known that section of road out of Biggs toward Rufus to be called Mattie’s Hump by the locals. Even my kids knew that. Mattie and Clyde became good friends with my husband Terry’s parents, Hap and Eudora Sanderson, when they bought the Biggs property from Mattie and Pete around 1970. ”

“Clyde was called Pete. This is what we remember of their story. Mattie came out of Canada and worked for Bell Telephone in Wasco. She fascinated me because she was such a good entrepreneur. There was an old guy who owned that property and lived down by the creek. Mattie bought it from him. All by herself, she had the vision for the café and gas station. I don’t know how she did it, probably through loans. People were just starting to travel and the highway was newly built. Pete was a bit younger than Mattie and went to work for her. He was from the Finley Butte area of Morrow County.

“Pete and Mattie got married but had no children. He was a jolly fiddle player who loved to socialize. She was all business and definitely ran the show. The Maggie and Jiggs cartoon theme in their establishment, Dinty’s Cafe and service station, reflected their personalities.”

Dinty’s sign on Highway 97 read, “Sleep, Eat and Get Gas with Us.”  Dinty’s Café and Motel in Biggs were featured on a postcard issued in the early 1950s. A group of mechanical figures played songs for a dime.

Teri noted that, “Mattie brought people down from Canada to work for her, Harvey and Annabelle Hanson. Annabelle was her niece. And Joe Reeves and Milt Tumilson. Mattie said that Jack Beers came to her with a car load of babies and nothing else and asked for work. He cooked for her in the little cafe.

“When the Biggs bridge was built in 1962, Jack decided to build a new cafe at the same time Mattie was in business at Dinty’s Café and service station on the corner. They were rivals after that. Then Joe Reeves sold Dinty’s Cafe to Bill Beers.

“When we met Mattie and Pete they had a beautiful place on the west side of The Dalles. They really liked Hap and Eudora, and wanted us to visit. Hap and Pete would play the guitar and fiddle and sing. Mattie and Eudora would talk business.”

When Pete died in The Dalles on August 31, 1986, at age 80, after many years as owner-operator of Dinty’s Motel and Café and service station at Biggs Junction, he was survived by his wife, Virginia “Mattie” Finley. A veteran of World War II, he was a member of the American Legion Post #19 and the First Christian Church in The Dalles.

Virginia E. “Mattie” Finley died January 22, 1987, at age 88 in The Dalles. She was born June 4, 1898, in Tilden, Nebraska. For many years she was the owner and operator of Dinty’s Motel and Café and service station in Biggs. She was a member of the First Christian Church. She was survived by sisters Lily Ingram of Sacramento, California and Ruth Elvey of Vacaville, California; a niece and her husband Annabelle (Parks) and Harvey Hanson of The Dalles, also long-time owners-operators of Dinty’s Motel and Café.  Pallbearers at her funeral were Terry Sanderson, Bodie Sanderson, Joe Reeves, Bill Beers, Milt Tumilson and Doug Tumilson.

So, who was Mattie Finley?

Mattie was born Virginia Ellen Parks on June 4, 1898 in Madison County, Nebraska. For some reason she was called Mattie and sometimes appeared in public records as Jennie, a nickname for Virginia.

A Sherman County business woman by 1930, living in Locust Grove Precinct, Jennie E. Parks, 30, was a dealer with a service station, single and born in Nebraska. The only other person in her household was Clyde L. Finley 22, single, a laborer at a gas station, born in Oregon. Clyde is our Pete, the son of Arthur A. Finley, and the nephew of Ralph Finley, Mattie’s first husband.

Mattie married Pete Finley on November 1, 1932. The Sherman County Journal, November 4, 1932, reported: “Double Wedding Unites Sherman County Folks. We do not know the percentage of weddings that are performed in duplicate, but are reasonably certain that few wedding services are read to four persons at the same time. Anyway Sherman county people held the first one in some time last Tuesday evening when Christina Saunders was married to Floyd Flatt and Mattie Parks was  married to P. L. Finley. The ceremony was performed at Dinty’s Service Station, home of Mr. and Mrs. Finley, by Justice of Peace Joseph A. Mee of Wasco. Mrs. Flatt is the daughter of Mr. and Mrs. W. A. Saunders of The Dalles. Floyd is one of Moro’s farmers as well as a dray operator. The Flatts will live in Moro.”

Who was Pete Finley? Pete was born Clyde Leroy Finley on April 13, 1906, at Lexington, Oregon, to Arthur Alfred and Cora B. (Winnett) Finley. He was the nephew of Mattie’s first husband, Ralph Finley.

Among the families living in Locust Grove Precinct, Sherman County, in 1930, were: