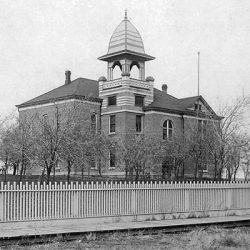 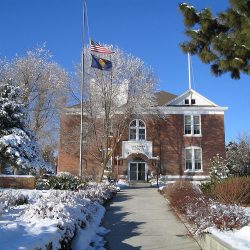 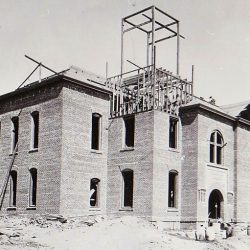 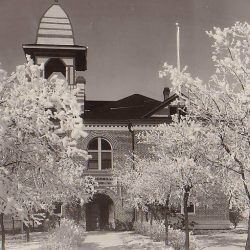 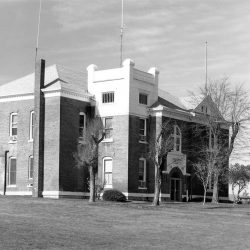 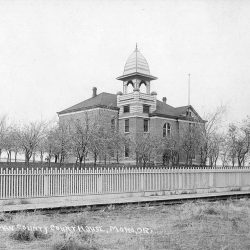 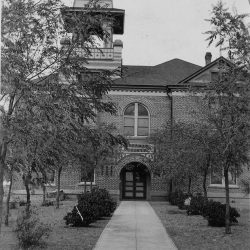 The Sherman County Courthouse is one of only three county courthouses in Oregon to be used continuously since its construction in 1899. The Courthouse is located at 500 Court Street in Moro, Oregon. It was designed by prolific architect Charles H. Burggraf and built by A.F. Peterson in 1899 using brick sourced and manufactured locally in Moro. A Queen Anne-style building, it was listed on the National Register of Historic Places (NRHP) in 1998.

In the Circuit Court of the State of Oregon for Sherman County.
In the matter of the final report of the Grand Jury, March term, 1899.

We, the Grand Jury, hereby submit and have examined … all the business that has come before us, and have returned into court one not true bill of indictment.

We have examined the county clerk’s, sheriff’s and treasurer’s offices, and find said offices, with the books and records therein, to be carefully and so far as we are able to judge, in the limited time allowed us for such examination, correctly kept.

We have also examined the county jail, and find same in good condition.  We find further that there are five county charges who are properly cared for by the county court.

On account of the lack of room and great danger of fire in the present cramped offices of the clerk, sheriff and treasurer, and the inconvenience of holding county and circuit courts, we believe that the county should build a court house.  And we therefore recommend that a court house be built as soon as the necessary plans and contracts therefore can be made; said court house not to cost more than $6000.

Wherefore having finished our labors for this term of court, we respectfully submit this our final report, and ask to be discharged.

A. Kyle had a narrow escape yesterday while at work on the new court house building. He was in the act of rolling up a barrow of brick on the second runway, when he got overbalanced and fell to the lower floor, a distance of 12 feet. His wounds being dressed, Mr. Kyle did not make any fuss over his injuries, which were quite serious — enough to confine a man of less grit to his bed.

Chas. H. Burgraff of Salem, architect of the court house, inspected the work done on the new structure last week, and is much pleased with the progress made.

Mr. Burgraff is kept busy just now, having no less than four court houses, together with other minor buildings under his supervision.