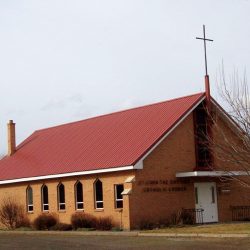 The history of the Catholic Church in Sherman County exists in relationship to The Dalles and then to the churches in Dufur, Maupin and Antelope. When first organized, the Catholic communities in what was then Wasco County were all missions of St. Peter’s in The Dalles, and were served by missionary circuit riders who celebrated Mass once or twice every month in each community many times celebrating Mass in the homes of parishioners. Around the turn of the century, Maupin was established as a parish church with Dufur as a mission. Then as population shifted, Dufur became a parish church with Maupin, Wasco, Grass Valley and Antelope as missions.

In 1904, the first Catholic Church in the county was built in Wasco for $3,000, serving primarily the Fox, Macnab and Van Patten families. In 1928 a second church was dedicated in Grass Valley, supporting the mainly German families – Buether and von Borstel families were the foundation joined by Holmes, Simon and Bird families. In the late thirties, the original Wasco church was abandoned and Mass was celebrated in an old print shop on Fulton Street. As the population grew, Wasco became a parish church in 1954, thanks in no small part to the families of Alec Macnab as well as the Hill, O’Meara, McIntyre and Welk families. Grass Valley, named St. John the Baptist, included the Irzyk, Johnson, Moreau, Mulick, Sharp, Shipley and Wooderson families, and Antelope, with the Forman, Hill and McNamee families, continuing the name of St. Mary were named missions of St. Mary, Wasco. In the early 1950s following completion of the rectory in Wasco, the print shop was sold to the Bidgoods and, with the generous financial assistance of the Catholic Extension Society, a domestic missionary organization, the current churches in Wasco, Grass Valley and Antelope were completed. In the early 1960s the parish hall in Wasco was completed, again through the generous help of the Extension Society. In this decade, the church at Antelope was disbanded and the church building offered for sale.Father Martin Quigley was named the first pastor of the Sherman County churches in 1954. Fathers Beard, Began, Condon, Conway, Keating, O’Connor and Vogl served in residence. Fathers Albrecht, Anselm, Benedict, Hazen, Kelbel, Stone and Stryzyck served in visiting capacities. Our current pastor is Father Augustine Okwuzu.