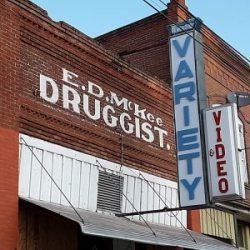 Edward D. McKee (1873-1966) was the second druggist in Wasco when he opened the Wasco Pharmacy in 1899 and operated it until his retirement about 1953. Afterward the building housed a druggist and variety store. Active in civic affairs, he was serving as a county commissioner 1917. He married Mary Virgilia “Molly” Dunlap, the daughter of one of Wasco’s founding families, Clark and Nancy (Chapman) Dunlap, in Wasco in 1901, and they had a son and a daughter, Marion and Margaret. ~ Sherman County Journal, December 1, 1966.